How Science Tracks The Criminal (1921)

Travel back to a time before CSI. This classic article is a forensic science call to arms.

The Sherlock Holmes type detective, the person who smells a letter and tells at once that the murder was committed by a bald headed man wearing eye-glasses, may seem a far-fetched creation of the novelist. Their exploits have been over-drawn for the purposes of fiction, but their methods are sound. Above all things, this type of person is a scientist.

There are no fewer than four chairs in as many European universities occupied by professors of crime detection, the new science called criminalistics. These pioneers have laboratories in which the minds and methods of criminals are studied. In Graz, Austria, for example, you will see collections of all the know poisons of Europe, the sword-canes and rifle-canes with which assassins lie in wait to kill, plaster models and accurately drawn plans of crimes, the skulls of men who have been killed by blows on the head. Students who take the course in criminalistics are expected to look at a skull and say: "This man was killed by a hammer blow."

One graduate caught a murderer who had left behind him nothing but a derby hat in which there was a single hair."Look for a man between forty-five and fifty, partially bald with gray-streaked hair." The police found him.

Why did the scientific detective say that? Because by chemical and microscopic means it had been determined that there was perspiration in the hat; one of the hairs was gray, and it was the kind of hair that drops out a head that is growing bald. All modern science has been drawn upon in this tracking of the criminal. 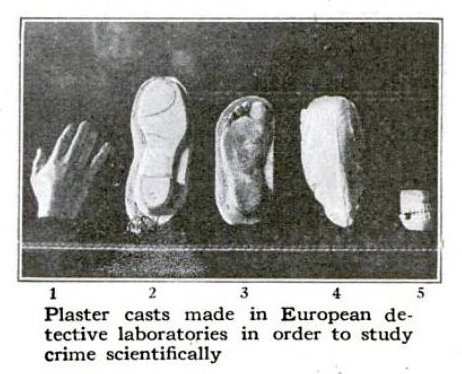 2 and 3 Plaster casts of footprints made with a booted and a naked foot.

4. Imprint of a criminal knee.The scientific detective determined that the imprint was left by striped trousers made in Manchester.

5. A certain burglar bit a section out of a piece of cheese and threw the rest away. This is a cast of the bitten section. It showed that one tooth was missing and it enabled the police to find the burglar.

Professor Gross, who founded the chair of criminalistics in the University of Graz, could look at the footprints of a man and determine whether he had been walking or running, whether he had been carrying a package or not, and even whether he was suffering from a disease. Bertillon, who did far more than give us the measurement system of classifying convicted criminals, went so far as to gather information on to methods used by Parisian shoemakers in nailing heels in place; for each shoemaker used a definite number of nails and hammered them in according to a plan of his own. Bertillon had only to look at a footprint in order to deduce the probable maker of the shoe that left the imprint.

The first step taken by a European criminalist is to make a scientific study of the scene of the crime. The criminalist uses either the scientific method of photographing devised by Bertillon - a method that makes it possible to measure with the utmost refinement on the photograph the distance of one object from another - or else they will make an accurate drawing, noting the exact position in which every object is found. Sometimes the criminalist will even makes a three-dimensional plaster cast. The criminalist looks always for what is technically called "the error in the situation" - in other words, the little unforgotten thing or act that betrays.

Gross once found the dead body of an old man swinging from a chandelier. Suicide was the verdict of the police, and suicide was the first conclusion Gross drew. Then he studied his drawing. There was no chair near the man! Somebody must have hung him to the chandelier. The doctors assured Gross that the man had died a natural death! Then the real search began. Gross found that the old man had been left in charge of two servants. One night, after he had fallen asleep, they decided to go to a dance. When they returned they found their charge dead. Frightened, the valet suggested that it would be well for them to make it appear as if the old man had committed suicide. Together they hung him, but they forgot to kick over the chair.

These criminalists deal not only with the physical facts of crime, but also with the psychology of criminals. It is important to learn everything that can be learned of the loves and hates of thieves and pickpockets, their superstitions, and their slang. The criminal mind is not a normal type. It is firmly believed by thieves, in Europe at least, that something must be left on the scene of the crime to avoid detection. One man left behind two or three matches torn from a block of the kind given away in cigar stores. Professor Reiss, of the University of Lausanne, picked them up. He ordered all the suspects searched. A block of matches was found in the pocket of one. The two incriminating matches dovetailed into the stubs.

We need laboratories in America like those described above.