Welcome to the history of forensic science page. The aim of this section of the website is to highlight notable forensic landmarks and developments.

The concept of applying 'scientific' principles to legal questions has a long and intriguing history. For example:

The Rise of Forensic Medicine

Forensic medicine first appeared as a distinct subject in works such as Paolo Zacchia's Questiones Medico-Legales (1621). These early treatises discussed medical questions commonly treated in courts: How could one determine whether an infant was stillborn or the victim of infanticide? Whether a woman was a virgin? Whether a body found in water was someone who had drowned or the victim of a disguised homicide?

In the early 1800s, forensic medicine was not divided into distinct disciplines. Physicians and surgeons who performed autopsies and testified in court depended on a variety of sources for their income and provided expertise as needed. No regular system of payment was provided for expert testimony, laboratory analysis, or postmortem examination. Toxicology and forensic pathology were just emerging as distinct fields, and most autopsies were performed by physicians without any special training.

In cases of homicide or suspicious death, in medieval England, the coroner, an appointed official who had no medical training, was required to make "a view of the body," a legal, visual inspection. Since then, medical professionals have played an increasingly important role in making views of the body. Physicians and surgeons have developed methods of seeing into the body through autopsy and post-mortem examination—making visible what the untrained, unequipped eye cannot see.

Post-mortem dissection, or autopsy, was among the earliest scientific methods to be used in the investigation of violent or suspicious death. Autopsy remains the core practice of forensic medicine. The postmortem examiner surveys the body's surface, opens it up with surgical instruments, removes parts for microscopic inspection and toxicological analysis, and makes a report that attempts to reconstruct the cause, manner, and mechanism of death. These clips from training films show some of the procedures of postmortem examination.

Tools of the Trade

The post-mortem examiner visually surveys the body's surface before opening and entering the body with the help of a scalpel and other instruments. After visual examination of the body cavities, the examiner removes parts for chemical analysis, inspection with a microscope, and other tests. Tools and tool kits specially adapted for use in autopsy first appeared in the early 19th century.

Physicians and surgeons first gained practical knowledge of death and decomposition through handling and dissecting bodies obtained for anatomical study. Over the course of the 19th and 20th centuries, the study of the decomposed body and body parts—the effects of time, environment, and manner of death—became a vital part of forensic science.

Fauna of the Cadaver and Time of Death

In the 19th century, medico-legal researchers began studying patterns of insect colonization of the cadaver. Entomology, the study of insects, became one of the forensic sciences. By identifying the particular stages that insects go through as they develop on a dead body, and the succession of different species, forensic investigators attempt to determine where a victim died and estimate the time elapsed since death. These adult specimens represent some of the different insect species that colonize a cadaver.

As commercially manufactured poisons became increasingly available in the 19th century, poisoning became known as a "modern" and disturbingly hard-to-detect method of killing. In response, researchers developed toxicology as a specialized field of forensic medicine, and devised specific tests for poison, most famously the 1836 Marsh Test for arsenic.

The new science of toxicology was plagued by difficulties. In the courtroom and laboratory, seemingly reliable tests were shown to be flawed. But, over time, toxicology's trials led to better knowledge of the action of poisons and better methods of chemical analysis.

Spectroscopy was born in the mid-17th century, when Isaac Newton discovered that a prism divides white light into constituent colors. Subsequent researchers discovered that specific substances, subjected to flame, give off unique patterns of light that show characteristic "emission" bands and "absorption" lines when cast through a prism.

The first practical application of fingerprinting as a unique individual identifier came in the 1860s. Sir William Herschel, a colonial administrator in British India, used fingerprints to detect false pension claims. In an 1892 case in Argentina, Juan Vucetich became the first investigator to use fingerprints to help secure a conviction for murder.

A useable classification system was necessary before forensic fingerprinting could be put to practical use. In the 1890s and early 1900s, Vucetich in Argentina, and E. R. Henry in British colonial India and Great Britain, separately devised such systems. After a series of dramatic cases proved its merits, fingerprinting spread rapidly. 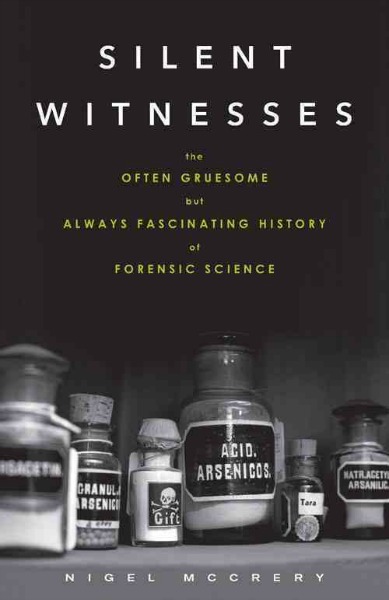 A crime scene. A murder. A mystery. The most important person on the scene? The forensic scientist. And yet the intricate details of criminal forensics work remain a mystery to most of us. In a book that is by turns fascinating and chilling, Nigel McCrery leads readers around the world and through two centuries to relate the history of forensics in accessible and entertaining prose. He introduces such colorful characters as Dr. Edmond Locard, the "French Sherlock Holmes"; and Edward Heinrich, the "Wizard of Berkeley," who is credited with having solved over 2,000 crimes.

All the major areas of forensics, including ballistics, fiber analysis, and genetic fingerprinting, are explained with reference to the landmark cases in which they proved their worth, allowing readers to solve the crimes along with the experts. Whether detailing the identification of a severed head preserved in gin, the first murder solved because of a fingerprint, or the first time DNA evidence was used to bring a sadistic killer to justice, Silent Witnesses provides dramatic practical demonstrations of scientific principles and demonstrates a truth known by all forensic scientists: people still have a story to tell long after they are dead.


Go From History of Forensic Science Back To The Home Page