Programs such as Forensic files, Law and Order, CSI, CSI Miami etc may be hugely popular and thoroughly entertaining but they have created what is know in academic and professional circles as the 'CSI effect.'

Put simply, the CSI effect is the perception of the near-infallibility of forensic science which has evolved in response to forensic TV shows. For example, a major distortion between fictional portrayals and the application of forensic science in the real world is 'time frame'. It can take several weeks, if not months to get results back from the lab, however, in the fictional world of forensic science and crime scene investigation, results invariably come back straight away.

Despite the increasing interest in the "CSI-effect", its only recently been subject to serious academic and theoretical scrutiny. An important landmark in this respect is the research of Donald E. Shelton.

Writing for The National Institute of Justice, Shelton wrote a wide ranging article concerning the CSI-Effect, documenting research relating to such things as:

CLICK HERE to read 'The CSI-Effect: Does It Really Exist' for free.

The CSI Effect in Action

It would seem that the CSI-effect is most visible in the court room, particularly among jurors. According to forensic science expert Max Houck, prosecutors fear the CSI-effect among juries because they may question why everything isn't subject to forensic analysis, when in fact not everything has to be. Equally, Defence attorneys are concerned about the CSI-effect because jurors may perceive the science of forensics as completely objective and totally accurate, thus ignoring the possibility of human or technical error.

Writing for USA today Richard Willing outlined a number of examples that highlighted the CSI-effect in action. These included:

A murder trial where jurors asked the judge if a cigarette butt found during the crime scene investigation could be tested to see if it could be linked to the defendant. The defence team had ordered the tests but hadn't introduced them into evidence. Upon doing so, the tests exonerated the defendant, and he was acquitted.

The fact that prosecutors are now being allowed to question potential jurors about their TV-watching habits. 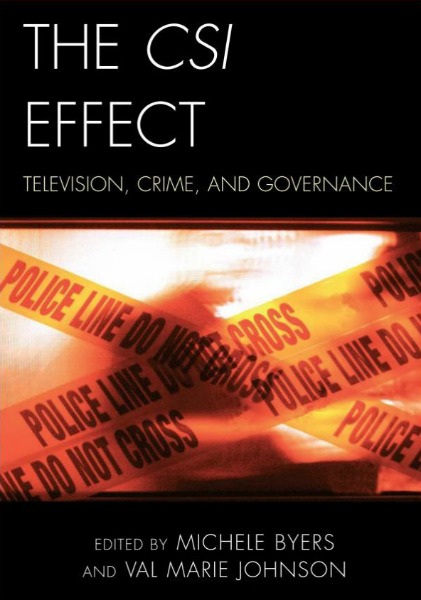 CSI has been heralded in many spheres of public discourse as a televisual revolution, its effects on the public unprecedented. The CSI Effect: Television, Crime, and Governance demonstrates that CSI's appeal cannot be disentangled from either its production as a televisual text or the broader discourses and practices that circulate within our social landscape.

This interdisciplinary collection bridges the gap between the study of media, particularly popular culture media, and the study of crime. The contributors consider the points of intersection between these very different realms of scholarship and in so doing foster the development of a new set of theoretical languages in which the mediated spectacle of crime and criminalization can be carefully considered. This timely and groundbreaking volume is bound to intrigue both scholars and CSI enthusiasts alike.


Go From The CSI Effect Back To The Home Page