A defendant was on trial for assault. The jury was in doubt when Dr. Paul L. Kirk, of the University of California's crime laboratory, showed them a pair of similar hairs wound around a glass bobbin. One hair was found on the scene of the crime; the other taken from the accused.

"I can't prove that these two hairs are from the same head," said Dr. Kirk. But then he went on and demonstrated point after point of identity between the two strands.

The verdict was "guilty."

To describe a hair scientifically you must look inside it, and study its structure - particularly when a man's liberty or life is at stake. A good head of hair contains about 130,000 strands. They assume many shapes, the majority being oval in form.

Their structure is complex. A hair is divided into three parts: scale, cortex, and medulla. The scales appear as tiny shingles, several hundred to the inch. The cortex,immediately under the surface scales, is composed of a group of tiny elongated fibrils. The medulla (not always present), is a pithy core of cells interspersed with diffused pigment, pigment cells, and air spaces, lying along the central part of the shaft.

And to confuse the hair detective, the hairs on the crown of a man's head are not the same as those on the nape of his neck. A permanent wave can result in two spots of a single hair being different in both appearance and composition. Dyeing alters surface hair color but not internal-pigment color, while bleaching does both. 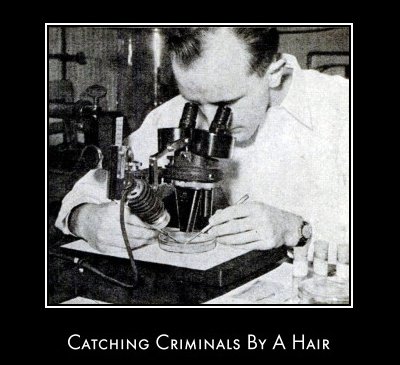 Refractive index (the ability to slow up light passed through it) averages higher in women's hair than in men's, which helps the hair sleuth. Knowing the subject's race, Kirk can examine a hair, and four out of five times tell if it comes from a man or a woman.

Identifying the guilty and absolving the innocent by means of hair, however, is not yet a job for the cops. A vast store of knowledge must first be acquired by investigators such as Kirk. Comprehensive files including nearly all types of human hair must be built up and made available for study.

Kirk has already filed 100 hairs each from 400 people, mostly willing students at the University of California, covering all parts of their bodies. He plans to obtain samples from some of them over a period of 20 years to study changes that develop with age.

Although scores of factors enter into the hair identification picture, Dr. Kirk depends largely on the following major points to prove his cases:

This is the first and most obvious, and in many cases can quickly eliminate suspicion from a person. But color must be interpreted with caution, for shades of hair vary widely on a single head, such as from blonde to brown on a red head. Kirk hopes that an absolute color chart for hair may be worked out, and that the chemical identity or differences of pigments may be established as a check on color.

Scores of counts must be taken along one or several hairs to obtain an average. If the average count on your hair, for instance, is 24 scales for each two-tenths of a millimeter of length, all hair averaging less than 22 or more than 26 would be considered as coming from someone else.

This means the shape, regularity or irregularity of sizes, edges, and any other features revealed through the microscope. Generally, hair scales of one head follow the same general pattern, and hairs have been identified on this basis alone.

This is one of the best points of evidence in the identification of hair. Both density and distribution play a part. "In general," Kirk says, "the pigment density is inversely proportional to the amount of light that can be transmitted through the hair." Very light blonde or gray hair is a minimum density. Distribution of pigment granules is also important.

The presence or absence of a pithy core (medulla) in hair is not considered of great significance. However since some people have much medulla in their hair, and others little or none, its study is sometimes of value.

The varying ability of hair to slow up light serves both in matching hairs and in determining race and sex.

All hair is capable of this optical phenomenon to some degree When two hairs of the same diameter are examined with polarized light, however, those from the same source usually show the same interference colors; those of different origins, different colors.

The specific gravity of hair often differs among individuals, ranging from 1.30 to 1.39. It will also differ between medullated and nonmedullated hair of the same person.

Other factors may prove of consequence, such as tensile strength, stretch coefficient, and electrical characteristics. Permanent waved hair, for instance, stretches readily as compared to untreated hair. Perhaps hair of one individual will stretch farther than hair of another. So far, little investigation has been done along these lines.

Someday, Dr. Kirk believes, further research by physicists and chemists may make hair the equal of fingerprints as a means of positive identification.

LEARN ALL ABOUT CRIMINALISTICS

There is a page dedicated to criminalistics on the All About Forensic Science website which you can access via the following link.


Go From Criminalistics Article Back To The Home Page